An extrordinary afternoon of Bostik Premier League football saw the Hillians leave North London with a fully deserved point - but, oh what could have been... 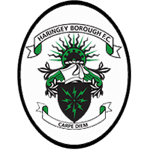 Simon Wormull made three changes to the side who lost at home to Bishop’s Stortford last Saturday, including the return of Aaron Smith-Joseph following a lengthy spell on the sideline.

Both teams started well exchanging early blows. The first incident of the game came when Tom Cadman’s effort rifled into the face of James Richmond, which subsequently led the the Hillians centre-half being replaced by Josh Tuck. Ralston Gabriel had a golden opportunity to open the scoring for his side, in the 14th minute, but he failed to direct his volley on target. Just moments later, Jared Rance turned on the jets before seeing his cross evade both Ben Pope and ASJ in the Haringey box. The Hillians more than matched the league high-flyers for the opening 35 minutes, and had a penalty appeal waved away as ASJ appeared to have his legs taken from beneath him – remember that word, “penalty”! In the 38th minute, the hosts had a penalty appeal of their own, this time awarded, and Ralston Gabriel made no mistake from the spot. The Borough regained possession immediately and Joel Nouble’s low cross was turned home by Gabriel for his second in as many minutes. Somehow, the Hillians found themselves two-goals down and nobody was entirely sure how!

The Hillians came out of the dressing rooms firing and began at electric pace. In the 48th minute, Rance halved the deficit with a beautiful strike which nestled into the top right-hand corner – after much deliberation with his lineman, the referee rightfully awarded the goal. Four minutes later, the scores were level, as ASJ said “anything Jazz can do, I can do better”, whipping his curling effort into the bottom left-hand corner giving Pajetat no chance. The excitement didn’t stop there, as Ben Pope was brought down by Pajetat just minutes later…you guessed it, penalty! The Pope dusted the black particles of 3G off his legs and cooly placed his penalty into the roof of the net. Steven Sargent was introduced in the 60th minute for his Hillians debut and what an introduction! A loose ball fell the the veteran, just outside the area, and his sweet strike nestled into the bottom corner. The hosts were stunned and the Hillians were well and truly in dreamland! The hosts began to pile the pressure on the Hillians backline but the cavalry held firm. The was until the 89th minute, as the ball struck the arm of Tuck from point blank range…penalty. Gabriel completed his hat-trick with another tidy finish from the spot. Just a minute later, the referee had that whistle of his wedged between his teeth, but not for full-time, but yes, another penalty…adjudging Boris Kipeya-Bonno to have clipped the heels of Durojayie. Gabriel converted his third spot kick of the game to bring his side level. Cue the full time whistle…

An emotional rollarcoaster of an afternoon which saw the Hillians fight back from two goals down, only for two late decisions to snatch the three points out of our hands. Nevertheless, a point on the road against a side who have only dropped two points at home since October 2nd isn’t all doom and gloom!

The Hillians MOTM was awarded to Ben Pope, who as well as cooly converting his penalty, held the ball up expertly all afternoon. Quite frankly, every man in a white shirt deserved the plaudits.

Next up, we host Harlow Town on Tuesday evening.