We extended our unbeaten run to four games, with a goalless draw at home to in-form, Folkestone Invicta. 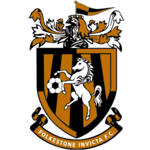 Simon Wormull made just the one change to the side which beat Lewes 3-0 on New Years Day – introducing Marco Correia to the starting line up.

The first chance of the game fell to Pat Harding, who struck over from four yards out in the 4th minute. In the 9th minute, Josh James was called into action as he smartly palmed Blanks’ effort off target. Arguably the visitors’ best chance of the half fell to Callum Davies, who headed just wide from a corner. In quick succession, Pope twice tested Roberts, but the Invicta keeper was equal to his efforts. The best chance of the half fell to Smith-Joseph, in the 30th minute, as his half-volley was palmed away by Roberts. The half petered out, with neither side creating much.

The visitors started strongly with Gary Elphick twice throwing himself in front of Invicta efforts. The best chance of the game fell to Ben Pope, in the 57th minute, as he ballooned his effort over from six yards out following some super work down the left by Smith-Joseph. Michael Wilson and Dan Beck were beginning to get a hold of the game, winning their midfield battles and sparking Hillians’ attacks. In the 75th minute, a clash of heads between Pope and O’Mara saw the Hillians forward lose a tooth and be replaced. The game ended with a couple of long throw-ins from Jonah, but to no avail, as the spoils were shared.

A fairly uneventful afternoon at the Green Elephants Stadium, but nevertheless another point on the board for the Hillians, which sees us climb out of the bottom three.

The Hillians MOTM was awarded to Dan Beck, who worked tirelessly both defensively and offensively throughout.

Next up, we turn our attention to the Sussex Senior Cup!