The Hillians fought back from 2-0 down, to pick up all three points at Hartsdown Park. 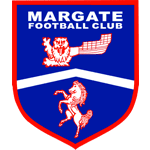 Simon Wormull & John Rattle made 3 changes to the side which lost 2-1 at Worthing in our FA Trophy First Round Replay on Tuesday night, introducing Tom Cadman, Gary Charman & David Castanho to the starting XI – the latter following an injury to Aaron Smith-Joseph in the warm-up.

Margate started the game brightly, with Alex Flisher putting his side one up after just 6 minutes, as his low free-kick found its way past Josh James and into the far corner. That man, Flisher was at the centre of the action just 8 minutes later, as his long throw-in allegedly touched the fingertips of James before finding the back of the net, to give The Gate a two-goal lead. The Hillians hit back strongly, with Newcombe being forced into two smart saves; first from Ben Pope and then from David Castanho. In the 34th minute, the Hillians halved the deficit, as Pat Harding was on hand to smash home, following Charman’s header rebounding off the upright.

The hosts started the second half well, enjoy their best spells of possession. However, it didn’t take young Michael Wilson and Dan Beck long to regain control of the midfield. The pace of Tariq Richards was introduced for David Castanho in the 55th minute. It was that man Richards who won the Hillians a free-kick in the 67th minute. Up stepped Tom Cadman, who curled his effort past Newcombe and into the top corner – sparking wild celebrations among the travelling Hillians. With the game poised at 2-2, Wormull & Rattle introduced Charlie Bennett in search of added energy. Josh James was forced into a smart save in the 80th minute, as he clawed Frannie Collin’s free-kick off target. The 88th minute was one to remember for all Hillians connections. As Michael Wilson delivered a dangerous in-swinging corner, Andre McCollin peeled away from his marker to the penalty spot, ‘keeper Newcombe could only punch the corner clear, but who did it fall to…that man McCollin – who ripped the back of the net with his thunderous volley. Hartsdown Park was left stunned, except of course the travelling Hillians behind the Margate goal! The Hillians saw out the game, keeping the ball in the Margate half, to take all three point back to the Green Elephants Stadium!

An incredible performance from the Hillians, who showed guts and desire to lift us off the foot of the Bostik Premier League table!

The Hillians MOTM was awarded to Gary Charman, who dealt expertly with the dangerous forward pairing of Taylor & Collin. He was also quoted telling Phil Tobin (Physio), “you’ll have to drag me off this pitch!” during the treatment he received after going down late in the game!

We now turn our attention to the Sussex Senior Cup, as we travel to The Polegrove on Tuesday night to face Bexhill United – 7:45pm kick off.