A battling Hillians performance ensured a return to RH15 with a point, making it 8 unbeaten in the league for Jay Lovett’s men. 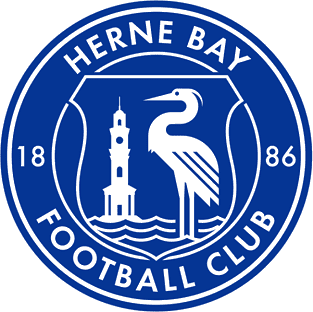 On a pretty miserable afternoon by the Kent seaside, Jay Lovett’s men looked to continue their resurgence in form by tackling promotion hopefuls Herne Bay. It was the hosts who got to grips with conditions quickest and spurned the first chance of the match. A corner was perfectly on the head of a Bay man in blue but he powered his header straight into Taylor Seymour’s gloves. The Hillians responded with a half chance for Lewis Finney down the other end, the ball broke kindly for him on the edge of the area but he couldn’t keep his effort down. The Kent outfit really should have opened the scoring after 15 minutes. Kieron Campbell jinked his way down the left and eventually whipped a delicious ball onto the head of Aaron Millbank who from 10 yards out, centre of goal, bulleted it wide of the post. Taylor Seymour was called into action just moments later, having to be at full stretch to push a stinging drive away from danger. A half chance presented itself for the Hill when a Lewis Finney free kick was met by Michael Uwezu but it was tame and easy for Jordan Perrin. Taylor Seymour was continuing to keep the game level, making a terrific near post save from Rory Smith – low down to his right in what was becoming a game full of chance for the boys in blue. Campbell was at the heart of the action for the hosts, as he was again next to let fly, but got his effort all wrong as the ball flew high and handsome. With 10 minutes to go until the break, the Hillians passed up a good opportunity of their own. Michael Campbell used his pace to get in behind before laying it off to Finney, he found Uwezu who’s shot was caught by the wind and left Perrin in the goal back pedalling and flailing at a rate of knots – luckily for him, the ball landed just over his crossbar. Back down the other end it was business as usual for Seymour, repelling yet another good chance for the Bay. The Hillians continued to grow into the game, as Michael Campbell had a half chance which he snatched at and dragged wide. With just 4 minutes until half time, Jay Lovett’s men almost took the lead. Max Miller picked up the ball on the halfway line and ran at the back 4, breezing past defenders with his pace, he got to the edge of the box and cracked an effort off the outside of the post. There was still one final chance for Seymour to deal with, as Millbank let fly in the swirling wind, but the Hillians stopper was on hand to shovel it away.

As the second half began, the Hillians defenders seemingly were still in the dressing room as a routine cross was not dealt with and almost let Zak Ansah in on goal, but the backline regrouped to eventually clear the danger. Herne Bay were really playing some nice stuff in and around the box but a combination of fantastic defending and a lack of cutting edge was proving to be their downfall. In the 65th minute, the Bay thought they’d taken the lead when Seymour couldn’t hold onto a dipping shot and Millbank smashed the rebound in, only to see the assistants flag raised to save the Hill’s blushes. Second half chances for the Hill were proving to be few and far between. Having said that, we could have moments later snatched the lead, as Lewis Finney’s free kick was only parried by Jordan Perrin, but no Hillians forward followed it in allowing Herne Bay to clear. For all their possession, the hosts didn’t have too many clear cut chances in the second half, the was until the 81st minute. A misplaced header allowed Millbank to bare down on goal, seemingly with only Seymour to beat, that was until Josh Spinks came flying across to snatch the ball off his toes and thwart the frontman. The longer the game stayed level, there was always a threat on the break for Hill. Substitute Hayden Skerry injected some much needed energy into the frontline and he fired a scorching effort which zipped inches over Perrins crossbar. As said many times before, there’s always one final chance and it came for the Bay. Michael Uwezu stopped a dangerous attack on the edge of the box resulting in a last gasp free kick which, to no surprise, Taylor Seymour flung himself to his left to fingertip it away in probably his most important save of the afternoon.

A really pleasing point away at a very strong Herne Bay side, with massive credit to Taylor Seymour and his backline for keeping their 4th consecutive league clean sheet.

Next up, it’s back in the Velocity Trophy on Tuesday evening with a trip to Ashford United!