The Hillians made hard work of it, but maintained their 100% record in the Velocity Trophy. 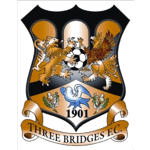 The Hillians dominated the opening exchanges, with Max Miller, Erivaldo Felix and Scott Kirkwood all coming close in the first twenty minutes. Pat Harding was next to try his luck, but, again, the Hillians couldn’t make their early dominance pay. In the 38th minute, the deadlock was finally broken, but by the home side, as Andrew Sesay headed home from a corner. Bridges went into the break one up despite all the Hillians’ pressure.

The home side started the second half on the front foot, with Callum Donaghey, who was making his first competitive Hillians appearance following a lengthy knee injury, and Junior Baker coming to the Hillians’ rescue with two goal saving challenges in quick succession. In the 64th minute, the Hillians finally found their groove again, as Max Miller smashed home after Michael Wilson’s effort cannoned back off the crossbar. Just three minutes later, Pat Harding turned the game on its head with a mouth-watering chip following some brilliant work from Steve Sargent. The Hillians had opportunities to put the game to bed, but, in the end, did enough to pick up the win.

So, Simon Wormull’s men make it three from three in the Velocity Trophy!

A massive thank you to every single one of you Hillians who made the trip to support the club on a chilly evening at Jubilee Field.

Next up, league action returns to the Green Elephants.